A Gift Full of Miracles

Years ago, I found an article written by a man who used to receive letters from a man who was in prison for life and would never get out. ...

It is a common trick used in many Westerns.  Two outlaws are being chased by a posse.  The bad guys are desperate to throw them off their trail.  So, one of the two outlaws dismounts from his horse and jumps onto the horse of his partner in crime.

They swat the riderless horse on the rump and it gallops off down the trail that leads south.  The two outlaws, riding on the same horse, ride north.

The posse, coming upon the tracks leading north and south, have to make a decision. In most Westerns, the posse rides south, following the riderless horse for miles before realizing they have been duped.  They discover (too late) that the riderless horse's hoof prints are shallow.  The hoof prints of the horse with the riders are deeper.

In real life, we follow the riderless horse when we chase after things that have no eternal value; when we work late, night after night, at the expense of our families; when we think more highly of the car that we drive than the neighbor next door; when we judge success by the zeroes in our bank accounts, the neighborhood we live in, or the number and expense of material things we own.

And later in life, we realize we have been duped, or that we have been selfish or stupid and that we didn't even know it at the time.

I was 43 years old when my father died.  It wasn't until then that I clearly and thoroughly realized that life essentially boils down to love; those you love and those that love you.  The only people who will remember you are those who love you and who carry your love in their hearts.

After my father's death, the world did not make sense to me; it had been turned upside down.  Because of the insight about love, I turned to the spiritual for more answers and explored the world's religions for common truths.

Love and charity; mercy and forgiveness; sacrifice, selflessness and service are eternal threads that run through all of the major religions.  These, according to their teachings, are what make life worth living.  These are the things that will change you and will change the world for the better.

Christ once asked, "For what shall it profit a man if he gains the whole world but loses his own soul?" (Mark 8:36).  This is a question we all need to consider before we set out to follow the shallow path of the riderless horse.

Years ago my wife and I decided that we needed a new couch.  My father-in-law knew a man who owned a furniture store who would give us a discount so we paid him a visit.  We looked at his showroom couches but we didn't like any of them.

"Well," he said,  I could let you pick out the frame, and the fabric (color and design), and we could order it special made from the factory.  I could sell it to you at cost plus shipping."  We liked the idea, so we picked out the frame and the fabric and put in our order. We even ordered a chair in the same fabric.

A few weeks later our new couch and chair arrived.  And we loved them.  As we placed the couch  against the wall and the chair beside the couch, we felt we had something unique, something special belonging only to us.

And they were comfortable and the couch lent itself well to Sunday afternoon naps.

Shortly after the arrival of our furniture, my wife's uncle died and we traveled to his funeral in the nearby town of Lexington, NC.  As we walked into the funeral home during the visitation the first thing we saw was an exact copy of our couch and chair sitting in the lobby.  They were the same as ours down to the last detail.

We sat on them and they were comfortable.  And we were no longer proud.

At home, after the funeral, our couch and chair did not look quite the same.  They were still comfortable and I still occasionally took a nap on the couch.

But every time I closed my eyes, I could hear a voice in my head say, "Look at him. Doesn't he look natural?"

The Birth of an Artist

The world defines an artist as someone who practices the creative arts.  But an artist is more than simply a practitioner. An artist is a person whose art lives deep inside them, whose soul is their art; and everything in their life, everything they see and do and everyone they know is affected by their art, which is their very life.  An artist may work in an ordinary job, as a salesperson, a cashier, or as an engineer or as an architect, or as a designer, but, he or she will always see things through an artist's eyes; seeing things not as they are but what they can become.

When my son was born and I held him for the first time, I wondered who he was and who he would become.  Watching him as he grew those questions grew inside me as he learned to crawl, then walk and talk.  I wondered where life would lead him.  Where would he go?  What would he do?  Who would he be with?

And the answers did not come gradually, but they came when I least expected them, taking me by surprise, showing me the future in quick bursts.

When he was three or four I was setting up the pool pump, in the process of getting the pool ready for spring; connecting the pool to the pump, the pump to the filter, and the filter to the pool.  Jeremy was with me, watching everything I did with intent interest.  After I finished, Jeremy said, "I know how this works." And he described the water being pulled from the pool into the pump, pushed into the filter and back into the pool.  He watched as I cleaned the pool and told me how the pool vacuum worked.

And I asked myself, who is he?  What would he become?

My wife and I bought him a Lego building kit when he was five or six. He immediately opened the box and began building the most complicated structure in the kit.  He worked for hours non-stop, not even taking a break for dinner.  And when he was finished we were amazed.  A structure about 4 feet tall stood in our den in front of the fire place.  "What is it?" I asked.  So, Jeremy began to turn a handle and four balls began to rise from the bottom of the structure to the top, and when they reached the top they began a zig zag descent to the bottom.

And those same questions nagged at me.

Years passed.  Jeremy and I were putting in a new kitchen floor.  I took a break, but Jeremy continued to work.  And as I stood watching him, the answers to my questions seemed clear to me.  Jeremy was not a carpenter, or a handy man , or a mechanic or an engineer or an architect.  He was something more.  It was the way he approached a project with such vision; able to see it in its completed form before beginning it. It was the intensity with which he worked; not wanting to.. or even able to.. stop before he saw his vision realized.  It was the way he worked, with such passion, as if the work had taken possession of his soul.

And so I knew.  Jeremy was an artist, able to look past the present into the future; to see beauty in the ugly; able to create order from chaos; and willing to sacrifice himself for his art and his vision of what things can become. 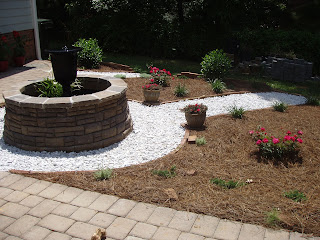 Everyone needs a peaceful place; a spot for reflection and retreat.  Although we are social animals, we also have the need to be alone; to escape the demands that society makes on us and to be wholly with ourselves, alone.  Henry David Thoreau wrote, "You think that I am impoverishing myself withdrawing from men, but in may solitude I...shall ere long burst forth a more perfect creature, fitted for a higher society (Journal, 8 February 1857).

My peaceful place is the backyard.  It is in the backyard that I spend my free time tending to my summer garden (tomatoes, squash, cucumbers, beans, peppers, etc.,); caring for the soil, pulling weeds, giving them water and nutrients, nurturing them and helping them grow into the plants they are supposed to be (eventually providing me with vegetables for my table).  Sometimes this is hot, hard work.  But at the end of the day, although I am sweaty, dirty and tired, I look over the garden and I hear the voice of God; not an audible voice, but an inward voice; not a voice of words, but a voice of assurance.  And the silent voice of God fills me.  And the peace of God overwhelms me.

When I need rest from my labors or just a quiet place to reflect, I retreat to my patio, a place that my wife and I have filled with flowering plants (roses, mandevillas, gladiollas, dahlias) ferns, and green shrubs.  We have hung hummingbird feeders on the pergola and bird feeders among the plants and on a window of our house.  My son built a fountain that bubbles not far away.  I can sit at a table there and prepare my sermon notes or reflect on things I have read, or just sit and watch the birds feeding.

Psychologists have long recognized that humans need solitude.  Solitude gives us the chance to shut down, to reconnect ourselves with that silent voice, to focus our thoughts or to clear our minds, to rediscover our own voice that has been lost among the many voices, and to recharge our batteries.

And if you do, you will "burst forth a more perfect creature." 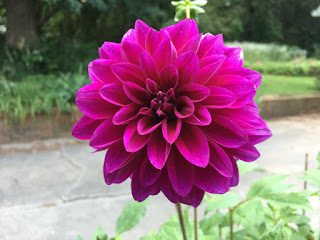 Posted by Eric Lanier at 9:06 AM No comments: